It’s the final month of the decade and 2020 is on the horizon. Coinciding with the holiday festivities, it’s the time of year that market analysts make their annual forecast. In this article we will talk about the 2020 forex market outlook for the UK and cryptocurrency. 2019’s market was moved by Brexit postponements, US trade wars with China, and a slowing overall economy. The start of the next decade looks to be no different as the market is definitely going to have reactions to the US presidential elections.

Cryptocurrency (such as Bitcoin) has also had an excellent recovery year despite a retracement over the last six months. While digital assets have continued to draw in more adopters, we won’t know if 2020 will be the year of cryptocurrencies until we begin seeing institutional investors taking the young ecosystem seriously. If this comes to pass, we may return to the glory days of 2017 for cryptocurrencies.

Now that the UK’s Dec. 12 elections have concluded, it seems that Boris Johnson is ready to move towards Brexit with his sweeping victory. While the Conservative Party may have won the majority and cleared up some of the fog surrounding the UK’s economic future, there is still a lot of negotiations to be had before a final deal can be reached. While a final deal between the UK and EU before the end of 2020 is not likely, it will give investors time to see if the country can bring in more foreign direct investments as well as businesses that have moved assets and operations abroad.

In recent weeks, we’ve seen the Sterling backing the Conservative Party sentiment and breaking above 1.30 against the US Dollar before experiencing a slight backslide as polls started showing favour towards the Labour Party. However, before the Parliamentary election, the Pound saw another surge, looking to try to break the resistance level of 1.32.

A strong conclusion as to how the Pound will perform in 2020 Q1 is a little clearer now that the parliament has a stronger unified message behind Johnson. With the recent surge after the elections, even with some minor retracements, it seems that for the time being, the Sterling will be in a bullish trend. Even with the uncertainty of Brexit, we could see a surge for Cable up to 1.40 in the first quarter, and in an extreme case, even up to 1.425. Coupled with the hawkish stance that the BoE has taken, we may very well see a return to form for the Pound. 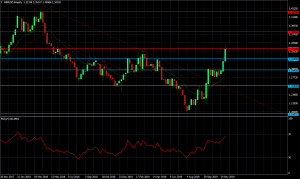 The GBPUSD pair saw a significant rise after it was determined that a Brexit No-Deal was not on the table for the previous Oct. 31 deadline. The rise took the pair from its all-time-low of 1.1975 up to its current height of 1.342 being accompanied by a bullish cross of the 14-day and 28-day EMAs. The pair is now facing strong resistance as it approaches the long-term trend line and the psychologically strong resistance level of 1.38. A stall in the rise can also be seen in the RSI as it nears the overbought level.

Cryptocurrencies, and especially the flagship Bitcoin (BTC), have had an interesting and somewhat turbulent lifespan, particularly over the last two years. At the end of 2017, Bitcoin reached an unparalleled height that no one could have foreseen, reaching nearly $20,000. However, 2018 almost proved all of the neigh-sayers right as BTC dropped to nearly $3,000.

2019 has proven to be a good recovery period for cryptos as a whole. As we enter a new decade, we may see more positive news for the nascent currencies. Prices may advance as global awareness rises and technology makes adoption easier, but the real mover will be in the investment of institutional money.

While trying to predict the course of cryptocurrency prices may be a fool’s errand, next year does seem to be a hallmark year for digital assets. The market will be looking forward to the halving of bitcoin in June which may see a surge in value in the lead up.

There are also a lot of big names still hyping up cryptocurrencies as the next coming of the financial markets. John McAfee, founder and CEO of the company behind the famous antivirus software McAfee, has been a long supporter of cryptocurrencies. Even during the slump of 2018, he continued to herald the benefits of cryptocurrencies and even speculated that BTC would reach $500,000 by 2020, however, he doesn’t have a lot of days left for that to happen.

Regardless of these astounding claims, thousands of investors have been pushing money into the crypto ecosystem, though trading volumes are still limited.

This may all turn around in 2020, as the market becomes more accessible in different parts of the world. Even though cryptocurrencies were considered by some as just being a gateway to move money gained through illicit activity, this new form of money is finding itself being used by individuals around the world to circumvent obstacles outside of their control. Most notably, we’ve seen digital currency used to avoid the hyperinflation that plagues Venezuela and hotels in Iran have used cryptocurrencies to avoid government sanctions. 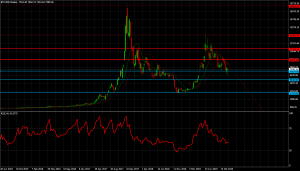 We’ve seen a huge retracement of BTCUSD over the last year since it’s 2017 crash. However, it seems that over the last six months it has lost its momentum and entered another decline, dropping from its June high of $13,856 and tumbling to a low of $6,300. This decline is also met with a bearish cross of the 14-day and 28-day EMAs as well as a decline in the RSI. The pair do seem to be supported at the $7,000 range and may find the necessary fuel to send it back into the mid-$9,000 by Q1 in 2020.